A Veteran From Southern Indiana Finds Solace In Art & Nature 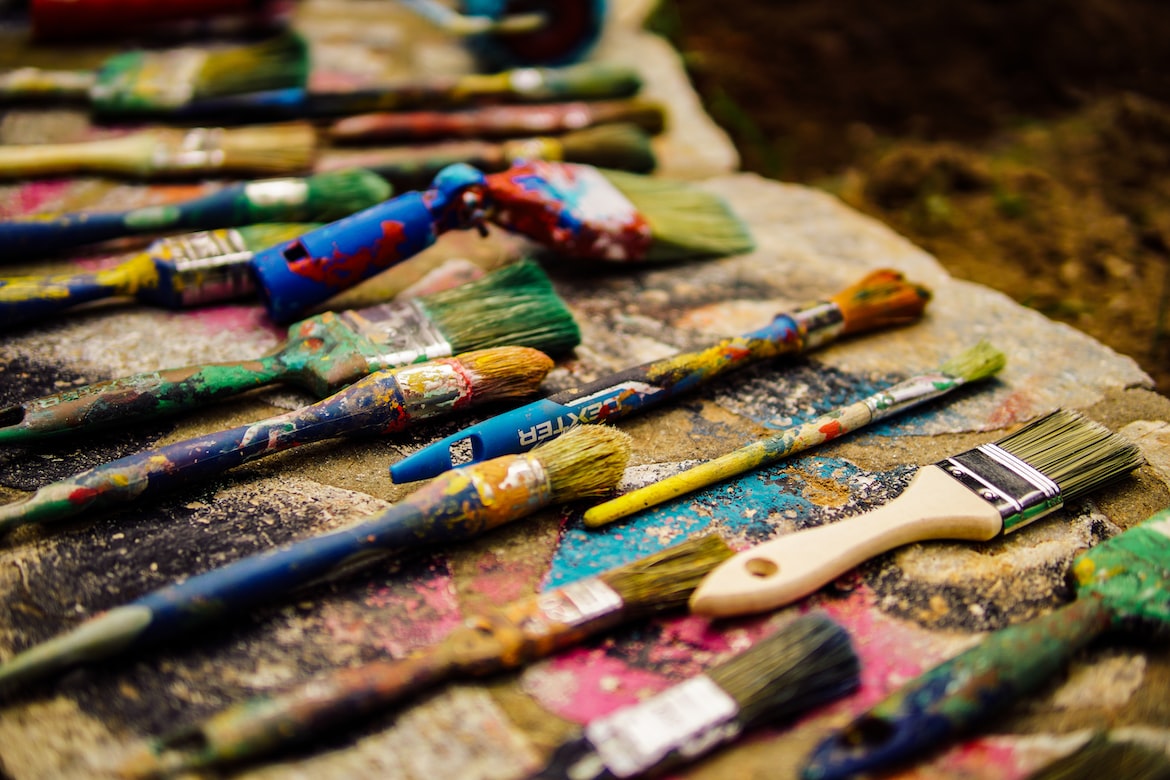 Mike Gibson, a Jeffersonville artist, has always considered Ohio Falls to be a special spot where he can explore the junction of art, nature, and therapy.

Gibson is now teaching a series of art courses at the Interpretive Center of the Clarksville State Park in collaboration with the Falls of the Ohio Foundation and the Arts Alliance of Southern Indiana. He works as a seasonal naturalist at the Ohio Falls for the Indiana Department of Natural Resources from spring through autumn.

He teaches art principles as well as activities like as sketching exhibitions and painting fossils on wine glasses in his art lessons. Gibson's work incorporates a number of techniques, including oil painting, watercolor, and installations.

"Things we take for granted," he says, "whether it's an ignored landscape or the concept of what women face in the military."

Gibson started working as a seasonal naturalist at the state park this year, but his connection to the location dates back to his youth, and it has long been a place where he finds tranquility and inspiration.

"I completed my papers on this site in school, in environmental science courses," Gibson added. "I gave all of my presentations about this site in speech lessons." This location has a special meaning for me. When I was six years old, I was exposed to the Falls region, and when my youngest was four, I brought her down here. It's a fantastic location."

He is a post-traumatic stress disorder (PTSD) veteran from the United States Army, and art and nature have helped him find solace. It helps him to see the Ohio Falls when he feels provoked.

"This area really soothes me right away," he stated.

Gibson grew raised in Jeffersonville, Indiana, and attended Jeffersonville High School. He joined the Army after graduating and served with the 25th Infantry Division for four years until retiring in 1992. He then served in the Indiana National Guard at New Albany for two years.

He worked for a number of industries after leaving the military, and when he was let off from his manufacturing job in 2008, his PTSD worsened.

"I'd been struggling since I came out," he said. "My background isn't very military, but I did serve in Operation Desert Storm. But what occurred over there at the time, it was a case of military sexual trauma, and that was my problem."

After a suicide attempt, he wound himself in the mental section of the Robley Rex VA Medical Center in Louisville, where he requested his physicians for his paint set.

He recounted how patients would crowd around him to watch him paint.

Gibson was a big fan of art in high school, and he continued to sketch while in the army. When he got out of the army, he used to watch Bob Ross on TV, and he was inspired to start painting. He became active in local art events and clubs, where he was encouraged to develop his own painting style.

When he was released from the hospital, he sought for disability benefits, and when he was approved, he discovered that he was able to attend college via the VA's vocational rehabilitation program.

He earned a bachelor's degree in fine arts from the Kentucky College of Art and Design at Spalding University in Louisville. He didn't go down the traditional route of asking for grants or showing his work after college, instead focusing on how he might utilize art to benefit other soldiers. He mentions how it has helped him cope with PTSD.

"If I was triggered, I'd take a brush, and within a few hours, I'd forgotten I was ever triggered," Gibson said. "All I was doing was painting."

He has spearheaded a variety of veteran-related initiatives throughout the years. Prior to the epidemic, he ran the Kentucky Center for the Arts' Arts and Healing Program, which met weekly with mental health patients at the Robley Rex VA Medical Facility in Louisville.

In 2015, he taught painting at Fort Knox's Warriors Transition Battalion, and he has also taught art to veteran students at Elizabethtown Community and Technical College.

Gibson helped to establish Warrior's Path, a program aimed at assisting soldiers with PTSD in their return to civilian life. Art for concentration, outdoor recreation for meditation, and community service for re-instilling a sense of purpose were all part of the program, which often included sending veterans to the Ohio Falls to pick up rubbish.

Gibson added that although the Warrior's Path program did not take off, he has continued to concentrate on the emotional and therapeutic sides of art.

Gibson used to spend a lot of time in the woods with his father and grandpa, hunting or fishing. He enjoyed being outside, and he remembered his grandpa teaching him how to recognize trees and other things.

His paintings in college were typically of natural landscapes, and he later grew interested in working for the Department of Natural Resources. In 2016, he began working at Deam Lake State Recreation Area in Borden as a summer naturalist.

He concentrated on educating tourists about themes like the environment and sustainability at Deam Lake. When he got the seasonal position at the Ohio Falls, he began studying more about geology, which he described as a "eye-opener."

Working at the Ohio Falls has provided him with a unique perspective on a familiar area.

"I look at all the things I painted about and realize I didn't realize what they were at the time," he remarked. "Holy smokes, I'm painting something that's 390 million years old," says the artist.

Naturalists normally have scientific degrees, but Gibson has discovered a link between his artistic background and his work as a naturalist, and he has fallen in love with the profession.

Working for the DNR at the Ohio Falls gave him the opportunity to teach monthly art workshops. In May, he hopes to teach a session on how to make mandalas out of natural materials to commemorate Mental Health Awareness Month.

He likes showing people the fossil beds along the Ohio River as part of his profession as a naturalist, which includes anything from caring for the bird sanctuary to eliminating invasive plant species. He is excited for the forthcoming season, and he plans to conduct activities such as songbird treks and bringing groups to some of the park's fishing hotspots.

Gibson hopes to become certified as a full-time naturalist as well as a qualification to conduct therapeutic hikes. He stated he would love to send patients from the VA hospital to the Falls of the Ohio for rehabilitation hikes.

The Falls of the Ohio Foundation's executive director, Kenton Wooden, said he appreciated Gibson's enthusiasm for the state park and was looking forward to having him return for the painting workshops.

"He created the art programs here, and they really took off," Wooden said. "It just seemed like a great intriguing opportunity to bring art here and to educate people about what we have here at the falls." "Mike is in this very unusual position of being both a Falls of the Ohio enthusiast and an artist, so he's able to bring the two together and share them with others in various ways."

"It's not a trek, it's not typical programming," he said, "but it's about learning about this area via art."

The Arts Alliance of Southern Indiana's programming director and curator, Paig Trinkle, says the group wants to get the word out about Gibson because "it's vital to get his gift out there, knowing that it affects so many others."

"Nature is an artist," Gibson says, citing anything from natural agate formations that resemble landscape paintings to the geometric arrangement of a snowflake examined under a microscope as sources of inspiration.

He sees the Ohio Falls as a "rich, historical monument" that continues to teach him new things, whether it's about the Devonian fossil beds or the local animals.

"Nature will show you art," Gibson stated, referring to what nature generates on its own.  Gibson may just be one of the many examples of art healing veterans.